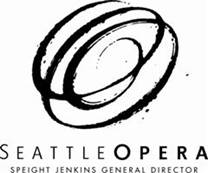 Elza van den Heever from South Africa and Michael Weinius from Sweden were selected from among the eight finalists by a panel of six distinguished judges. Each finalist performed two Wagner arias, accompanied by members of the Seattle Symphony Orchestra, led by the acclaimed conductor Asher Fisch. The winners will each receive a $15,000 prize, along with a boost to their careers.

“All of the judges agreed that we had eight fine finalists. I feel that the level was even higher this year than the first year,” said Jenkins.“It was a hard-fought decision for the two winners, but a great one.”

The International Wagner Competition will be broadcast in its entirety on 98.1 Classical KING FM and streamed from its website at www.king.org on Saturday, August 23 at 7:00 p.m. PST.

The eight finalists of the competition were selected last fall by Mr. Jenkins and Maestro Fisch from auditions in Munich, London, New York and Seattle. All of the singers are between 25 and 39 years old and have not had more than one major Wagner role in a major opera house.

Information about all the finalists and the judges can be found on the Seattle Opera website: http://www.seattleopera.org

Seattle Opera’s second International Wagner Competition was made possible by a generous contribution from the Charles Simonyi Fund for Arts and Sciences. The Simonyi grant also supports other education outreach at Seattle Opera.

Founded in 1963, Seattle Opera is one of the leading opera companies in the United States. The company is recognized internationally for its theatrically compelling and musically accomplished performances, especially the Opera’s interpretations of the works of Richard Wagner. Since 1975, Seattle Opera has presented 35 cycles of the Ring (three different productions), in addition to acclaimed productions of all the other major operas in the Wagner canon. Seattle Opera has achieved the highest per capita attendance of any major opera company in the United States, and draws opera goers from four continents and fifty states.

Originally from South Africa, soprano Elza van den Heever began her career as an Adler Fellow at the San Francisco Opera Center. She made her mainstage debut at San Francisco Opera in 2007 as Donna Anna in Mozart´s Don Giovanni. She returned there to create the role of Mary Custis Lee for the world premiere of Philip Glass’s Appomattox and to sing the First Lady in Mozart’s Zauberflöte and the Lady in Waiting in Verdi’s Macbeth. More recently, van den Heever made her European debut as Giorgetta in Puccini´s Tabarro at Oper Frankfurt and she returned to Frankfurt in June as Donna Anna.

Swedish tenor Michael Weinius has appeared at all major opera houses in his country as well as performing in Denmark, Norway, Austria, Spain, Great Britain, France, Belgium, Germany and the U.S. In 2004, Michael received the Gösta Winbergh Award and in 2006 the Birgit Nilsson Prize. Recent and upcoming engagements include Loge with conductor Kent Nagano, Parsifal, Siegmund in Die Walküre, Herod in Richard Strauss’s Salome, Johnson in Puccini’s Fanciulla del West, Don José in Bizet’s Carmen and Cavaradossi in Puccini’s Tosca, and two new Swedish operas written especially for him: Bathsheba by Sven David Sandström and Goya by Daniel Börtz.

German mezzo-soprano Nadine Weissmann frequently performs the title role of Bizet’s Carmen. After completing her music studies at Indiana University School of Music, she was a principal artist in Osnabrück for several seasons. She has appeared at the Rheinsberg Festival, Opéra de Monte-Carlo, Gulbenkian Orchestra Lisbon, Rundfunk-Sinfonieorchester Berlin, and recently made her debut at the Liceu Barcelona in Die Walküre. Weissmann became a member of the ensemble of the German National Theater in Weimar in 2007, where she began singing Wagner’s Ring cycle, appearing as Erda in Das Rheingold and Siegfried, Schwertleite in Die Walküre, and the Second Norn and Waltraute in Götterdämmerung.