Due Grammy Awards per la CSO-Resound 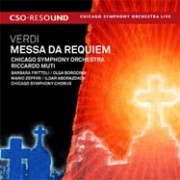 CHICAGO — The Chicago Symphony Orchestra and Chorus’ recording of Verdi’s Messa da Requiem, led by Music Director Riccardo Muti on the Orchestra’s own CSO Resound label, was awarded two Grammy Awards from the National Academy of Recording Arts and Sciences at the 53rd annual awards ceremony in Los Angeles on Sunday, February 13, 2011.

These Grammys are the third and fourth for CSO Resound since the CSO launched its independent record label in May 2007. Recordings by the Chicago Symphony Orchestra have earned 62 Grammy Awards from the National Academy of Recording Arts and Sciences. These are the first Grammys for Riccardo Muti, the 11th Grammy won by a Chicago Symphony Orchestra recording in the “Best Classical Album” category, the first Grammy for Duain Wolfe, and the 10th Grammy won by a Chicago Symphony Chorus recording in the “Best Choral Performance” category.

One of the Orchestra’s Grammy statuettes (Best Orchestral Performance for the 1990 recording of John Corigliano’s Symphony No. 1 with Daniel Barenboim conducting) can be seen on exhibit at the Field Museum in their Gold exhibit, which runs through March 6, 2011.

The Chicago Symphony Orchestra released Verdi’s Messa da Requiem in September 2010 as the 12th release on the CSO Resound label, coinciding with the launch of Maestro Muti as the 10th music director.

Muti leads these collective forces in an energetic and poignant interpretation of Verdi’s masterpiece. Since its release in late September 2010, this recording has sold nearly 7,000 copies.

A musical force in Chicago and around the world, the Chicago Symphony Orchestra has been consistently hailed as one of the finest international orchestras since its founding in 1891. At its helm since September 2010 is Riccardo Muti, the Orchestra’s 10th music director.

The Orchestra’s expansive catalog of recordings has earned 62 Grammy Awards. In 2007, in order to significantly broaden the reach of the world-class music making of the Orchestra, the CSO launched its in-house record label, CSO Resound. All CSO Resound releases are selected from live recordings of CSO concerts in Orchestra Hall at Symphony Center, documenting and extending a unique concert experience.

Previous CSO Resound releases include Stravinsky’s Pulcinella, conducted by Pierre Boulez; Mahler’s Third Symphony, with Michelle DeYoung and the women of the Chicago Symphony Chorus; Mahler’s Sixth Symphony and Bruckner’s Seventh Symphony, all conducted by Bernard Haitink; and the download-only recording of Shostakovich’s Fifth Symphony under Myung-Whun Chung.
CSO Resound is underwritten by a generous gift from Mr. and Mrs. Ralph Smykal.

Born in Naples, Italy, Riccardo Muti first came to the attention of critics and public in 1967, when he won the Guido Cantelli Competition for conductors in Milan. In 1971, Muti was invited by Herbert von Karajan to conduct at the Salzburg Festival; his association with the Vienna Philharmonic and the festival continues today. Muti has served as principal conductor of the Maggio Musicale Fiorentino, chief conductor of the Philharmonia Orchestra, music director of the Philadelphia Orchestra and music director of the Teatro alla Scala. In 2006, he was appointed artistic director of Salzburg’s Pentecost Festival.

Over the course of his extraordinary career, Riccardo Muti has conducted most of the important orchestras in the world, including the Berlin Philharmonic, Bavarian Radio Symphony Orchestra and the New York Philharmonic, among others. Maestro Muti made his debut with the Chicago Symphony Orchestra at the Ravinia Festival in July 1973. His appointment as the CSO’s 10th music director was announced in May 2008, and in September 2010, he assumed the post for a five-year contract. 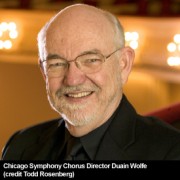 Wolfe retired in 1999 from the Colorado Children’s Chorale, an organization that he founded and conducted for 25 years. Also active as an opera conductor, he worked as conductor of the Central City Opera Festival for 20 years. Wolfe’s activities have earned him an honorary doctorate and numerous awards, including the Bonfils Stanton Award in the Arts and Humanities, the Colorado Governor’s Award for Excellence and the Denver Mayor’s Award for Excellence in an Artistic Discipline. He is a past chairman of the board of Chorus America, the national service organization for choruses.