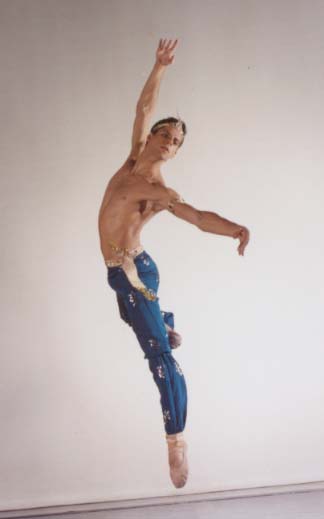 Marcelo Gomes, a native of Brazil, was born in Manaus and raised in Rio de Janeiro, where he began his dance studies at the Helena Lobato and Dalal Achcar Ballet Schools. He went on to study at The

Harid Conservatory in Boca Raton, Florida, and at the schools of the Paris Opera Ballet, Houston Ballet, Boston Ballet, and Cuballet.A prize winner at Lausanne (Hope Prize, 1996), he was also awarded second place at the National Society of Arts and Letters in 1994, and the Winter Festival in Brazil (1993). Gomes joined American Ballet Theatre in 1997 as a member of the corps de ballet.

His roles with the Company include the first and third movements in Bruch Violin Concerto No. 1, the Prince Charming in Cinderella, Franz in Coppélia, Conrad, Ali, the Slave and Lankendem in Le Corsaire, Espada and Basilio in Don Quixote, Oberon and Lysander in The Dream, Henry in Christopher Wheeldon’s VIII, the third sailor in Fancy Free, Albrecht and the peasant pas de deux in Giselle, The Man (Heaven) and Fortune in HereAfter, Lescaut in Manon, Camille in The Merry Widow, the pas de deux My Funny Valentine, the Cavalier in The Nutcracker, His Imperial Excellency in Offenbach in the Underworld, Onegin and Prince Gremin in Onegin, the Moor in Petrouchka, The Man From the House Opposite in Pillar of Fire, Jeanne de Brienne and Abderakman in Raymonda, Romeo in Romeo and Juliet, a Lover in Sin and Tonic, Sinatra Suite, Gold in The Sleeping Beauty, Prince Siegfried and von Rothbart in Act III of Kevin McKenzie’s production of Swan Lake, Aminta and Orion in Sylvia, the second movement in Symphony in C, Lucentio in The Taming of the Shrew, the Sylvia Pas de Deux, the Tchaikovsky Pas de Deux and leading roles in Amazed in Burning Dreams, Ballet Imperial, Baroque Game, The Brahms/Haydn Variations, Bruch Violin Concerto No. 1, Diversion of Angels, Études, Gong, In The Upper Room, Jabula, Petite Mort, Sinfonietta, Les Sylphides, Symphonic Variations, Theme and Variations, Within You Without You: A Tribute to George Harrison and workwithinwork.He created Aktaion in Artemis, the Portrait in Dorian, Death in

HereAfter and leading roles in Black Tuesday, Clear, Concerto No. 1 for Piano and Orchestra, and Glow - Stop.Gomes was promoted to Soloist in August 2000 and Principal Dancer in August 2002.