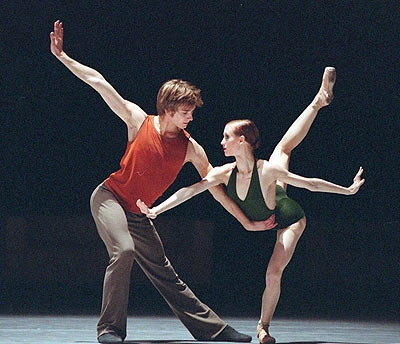 Alicia Amatriain was born in San Sebastian, Spain, where she received her first ballet training and subsequently attended the John Cranko School in Stuttgart.

During her time at the John Cranko School in Stuttgart, Alicia Amatriain danced in ballets such as In and Out (Hans van Manen), Triptychon (Ranato Zanella), the Blue Bird Pas de deux of Sleeping Beauty (Marcia Haydée), La Bayadère (Marius Petipa) and also the role of Blanche in Pineapple Poll (John Cranko). She joined the Stuttgart Ballet as an apprentice in 1998, was taken into the Corps de ballet in 1999.

She was promoted to Demi Soloist in 2000 and to Principal Dancer in 2002. In 2002 Alicia Amatriain made her debut as Tatiana in John Crankos Onegin and as Queen Isabella in David Bintley’s Edward II. She has also danced the following solo roles: Terpsichore in Apollo, the first and second movement of Symphony in C (George Balanchine), the novice in The Cage (Jerome Robbins), Manon and Olympia in The Lady of the Camellias (John Neumeier) as well as Blanche in Pineapple Poll (John Cranko) and Hermia in A Midsummer Night’s Dream (Jean Christophe Blavier). Alicia Amatriain has also danced several Corps de ballet and solo roles in John Cranko’s Initials R.M.B.E., The Taming of the Shrew and Romeo and Juliet, in Uwe Scholz’ The Firebird and Seventh Symphony, in Giselle created by Reid Anderson and Valentina Savina, Kazimir’s Colours of Mauro Bigonzetti, Theme and Variations of George Balanchine, Don Quixote of Maximiliano Guerra as well as in John Neumeier`s Now and Then, in Jerome Robbins The Concert and in William Forsythe´s Urlicht and In The Middle, Somewhat Elevated.

In November 2002, she made her début as Role in Pink in Dances at a Gathering (Jerome Robbins) and one month later as Odette/ Odile in John Cranko’s Swan Lake. In spring 2003, Alicia Amatriain made her debut as Juliet in John Cranko´s Romeo and Juliet. The following choreographers have created a role especially for her: Jean Christophe Blavier in E=mc²,the Canadian choreographer Dominique Dumais in still.nest, Stuttgart Ballet’s resident choreographer Christian Spuck in Songs and nocturne as well as Itzik Galili in his Pas de deux Mono Lisa and Wayne McGregor in Nautilus.