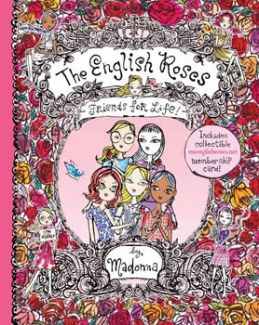 “The English Roses,” the phenomenally successful series of children’s books by Madonna, is scheduled to launch a new series of chapter books on September 13, 2007 aimed at the “tween” market of readers aged 9-12, it was announced today by Puffin Books, the series publisher in association with Callaway Arts & Entertainment. The first four titles, which continue the adventures of five best friends living in London, are illustrated in a highly decorative, whimsical style by renowned fashion artist Jeffrey Fulvimari, who illustrated the original best-selling children’s book of the same title (Callaway, 2003). The first four of twelve books — “Friends for Life!,” “Good-Bye, Grace?,” “The New Girl” and “A Rose by Any Other Name” (Puffin/Callaway; Hardcover Fiction; $9.99; 128 pages) — chronicle Nicole, Amy, Charlotte, Grace and Binah’s adventures in the sixth grade. Throughout the series, the English Roses will have crushes, survive family feuds, make new friends, and overcome rivalries. The world of the English Roses will continue online at www.myenglishroses.net, where tweens can play interactive games, take quizzes, read horoscopes, download screensavers, and enjoy many other activities. In addition, “members-only” sections of the site will be accessible by using secret codes from membership cards found in all four books.

Madonna, a best-selling children’s book author with six titles in the last three years (”The English Roses” [2003], “Mr. Peabody’s Apples” [2003], “Yakov and the Seven Thieves” [2004], “The Adventures of Abdi” [2004], “Lotsa de Casha” [2005], and “The English Roses: Too Good to Be True” [2006]), has collectively sold three million books across 42 languages and 100 different countries. The first English Roses picture book debuted at #1 on the New York Times bestseller list and sold over 1 million copies worldwide. Doug Whiteman, President of Penguin Young Readers Group, comments, “Madonna demonstrated in 2003 that she knows how to connect with kids through great stories and great characters. We are delighted to be part of this ongoing program, and can’t wait to bring ‘The English Roses’ to a whole new audience.”

Nicholas Callaway, Founder and Publisher of Callaway Arts & Entertainment, says, “Madonna knows girls. As one of the entertainment, cultural and fashion icons of our age, she will now take a new generation of girls on a great adventure in the life and times of the English Roses.”

All of Madonna’s proceeds from “The English Roses” series will be donated to Raising Malawi ( www.raisingmalawi.org ), an orphan-care initiative.