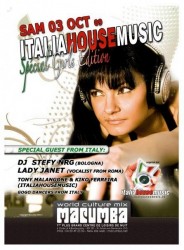 Saturday 3 October 2009 great Italian Dance Party at Macumba - St. Julien - France. Special Guest Dj Stefy NRG from Italy ! Dj Stefy Energy ‘The Witch Of Mixer’ from Italy ! STEFY NRG DJ / Producer / Song Writer . Stefy Energy aka Stefy NRG is one of the most popular dj in Italy. Stefy NRG is a very beautiful girl on the consolle since 1993. She was born in the magical Halloween Night, thats why she’s called ‘ Streghetta Del Mixer e di cuori ‘ which is ‘The Witch Of the Mixer and Hearts … ‘ She is an Italian dj/producer writing her own songs. Since 1993 she has been working as a special guest dj in many disco all over Italy. She played also in France at the disco called Number One and in Denmark at the disco called The Plaze.
Stefy works also as journalist, writing about music on many web magazines. In 1997, she started her career as a producer, cooperating with several record companies such as Saifam Records, Definitiva Records, TIME, Bliss.co
Between 1997 and 2000, Stefy Energy realised the project called Enerjay then published by Saifam including three singles Just Say No If You Believe- Youre Still The One.
In 2003 it was realised the cover Stefy Energy The Promise You made sung by the famous singers Taleesa & Aron Michel published by Definitiva. Since 2005 Stefy has been the producer and has realised, under the Bliss.co label, the following successful singles: I Need My Music, Promise, Its A Fable and the Album Music Is My Life, this great work included 13 tracks obtained with cooperation among many important artists such as: Danijay, Datura, Nathalie from The Sound Lovers.
In 2008 she realised two singles, the first one in March taken from the Album: Stefy NRG Feat. Nathalie Music Is My Life and the second one in November Stefy NRG & Alessia Kay Whisper including some special remixes by Maurizio Gubellini and Prezioso & Marvin.
SaN-R-G is a project made by Sander & Stefy NRG played by Top Djs as Dj Lhasa, Dj Cerla, Jens O, Verano, Tom Mountain.

Stefy NRG is currently one of the most interesting and requested artist of the national and international musical scene. www.djstefyenergy.com