THE FUTURE OF THINKING 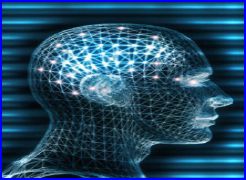 THE FUTURE OF THINKING

<Quantum-Bio Physic realm> is given for setting new foundation- principles for the ultimate frontiers of scientific knowledge.

The history of scientific thinking demonstrates that “foundation-principles” are most important to render predictable new frontiers of knowledge, than physical theories.

A better knowledge of self organization phenomena nowadays need to think about a “new conceived realm” of scientific reality, in order to overcome the old “Principle of Subjectification”, based on the arbitrary subdivision between “Res Cogitans and Res Extensa”; the last derived by the ancient “Descartes” thought, that split the unified realm of evolution , in subjective and objective sections, aiming to made a reduction of science to a simple < mechanics model>.

As a matter of facts the subject/object splitting in classical mechanics , was a consequence to search foravoiding to think, that brain, is effectively a bio-physical dynamic structure, working on the basis of the triadic forms of energy e,g. Energy, Matter and Information. In spite of the “Descartes reductionism” , brain’sfunctioning is really an objective-active manifestation of self-organization of Biological- phenomena. (1)

More in general is known that, the manifestation of “self organization phenomena” happens at all levels ofworld evolution. In fact bio-chemical systems exhibit, outside of equilibrium, their ability of self-programming of timing dynamics and of self assembly of molecular space dimensions, in any bio-chemical transformation.

In particular, “living cells” , continuously utilizes self-programming to re-programming their metabolism, till toforecast of the death of the cell ( Apoptosis -2) . Therefore, in similar way of the effective Brain’s functioning, all dynamic development of living and no-living entities, experimentally demonstrates that spontaneous selforganized systems exchange not only energy and matter, but also information, to realize a catalytic “nolocal” coordination of the development of every bio-chemical transformations.

Today a deeper underlying the reality of “self –organization dynamics” among “Energy, Matter andInformation”, is a fundamental scientific challenge to deeply understand the organization of nano-structures obtained by self-assembly methods in the fields of nano- and bio-technology , working at nano-metric scale.

The Nature of Information.

Starting from to break the barriers between “subject and object”, in proposing a new paradigm of “Quantum-Bio Physics” it is important to define some fundamental assertions related to the nature of Information in : Quantum-Bio-Physics Realm.

1) Nothing is “not- Energy” ; in fact Matter is a condensed energy (EM) and even pure Information belong to a form of Energy; this because “Information” is a fundamental aspect of all forms of bio-physical evolution. So that “information”, like the other forms of energy, is never destroyed, but only “codified//de-codified” in different commutative quantum-compositions of space-time matrix, getting different proportionality among the relative relationships of fundamentel forms of Energy. (3)

2) The chronotope, as well as the discrete Energy spectrum, is quantized ; therefore at the various levels of mutual relations between “space and time”, can be found different properties of interaction among the fundamental forms of energy. As a consequence of the general relativistic reciprocal covariance of the space with time vector’s matrix , “No” scientific concept is sufficiently defined without the knowledge of its space-time domain of validity.” (4)

3) Quantum Particles can be “entangled”, through any action of “confinement” that overlap the quantum wave-particles. So that the new conceptual framework of “Q. Bio.Phys”, advance the standard model of the Quantum Mechanics (Q.M.), in which every object is composed of separate Q. Particles. Besides Q.M. considers, complemented and indivisible the dual properties of “particles” (EM) and “waves” (i.e. Vibration-Energy- EV). (5)

4) The Entanglement of Q. Particles determines the quantum jump, generating the formation of a field of “pure quantum- waves by the splitting from the associated particles”,, getting the new Information Energy Field (EI), in two-dimensional structure in space and time. The “EI-field“ works as a resonant induction of “nonradioactive energy”, characterized by the specific Quantum Level of stationary Energy exchanges, related to the Entanglement power.

- Change of coulour in nano-particles- - Quantum Wave splitting from Particles

As a consequence of the previous postulates, the manifestation of information, can be differently codified, in relation to the possible quantum- interchangeability of space in time vectors at any critical changeof topological codification happening among the three quantum-metamorphosis of the “chronotope”. (6)

A) Quantum Fundamental Domain of Chronotope. (in coordinates: XYZ,T). The “Information Energy”(EI ) in the context of the traditional Space-Time structure, based on the “linear time”, is embodied inthe matter (EM) or Vibrational Energy (EV) ; therefore, in this domain “Information” can only be transferred from a point of space to another within the limit of the speed of light.

B) Second Domain of Chronotope, owed to a chronotope metamorphois (in coordinates : XY,T1,T2). The breaking of the uni-directional flow of the time in “forward” and “backward” times, obtained by “quantum entanglement”, produces a field composed by free waves of “Information Energy” (EI) . The existence of a “second time arrow” essentially permit to obtain a dematerialized “time-frame” where “simultaneity” can acts at distance, as resonant information for all the extension of the “EIField”. In fact, the continuity of the resonant “EI-Field”, having the same information at distance, is the essential characteristic of spontaneous self-organization phenomena in “Quantum-Bio-Physics” .

C) Third Domain of Chronotope, (in coordinates : X,T1,T2,T3) is fitting a complex constructive/disruptive quantum-dynamics of traversable “worm-holes” in an single dimension of the space, generating in this way a “tunnelling geometry of space-time” in three phases, associated to T1,T2,T3, time-vectors characterizing the three “Inform-actions” : ‘ ) -disembodiment of virtual information (EI) from (EV and EM), ” )- connecting via, EI-field mirroring effect, the disconnected regions in the wormhole between the two clock-wise and un-clockwise vortex-actions, ”’ )- evaporating the radiation out of the wormhole in the great Universe. Therefore “Information is ‘not lost’ in wormholes, but is mirrored at distance in a dense gravity that alters the space-time till to an linear space dimension of the Energy -transfomation flow.

According to the Quantum-Bio-Physics paradigm of space-time quantization , the principle of “Total Energy Conservation” is effectively extended to include the power of mental experiences of the human-subject, so important to implement energy transformations in nature, by means the development of scientific rationale and artistic aesthetics of mind creative expression.

An good occasion to open a participatory debate of foresight emerging challenges from the < Quantum-Bio-Physics Realm > in modern science&art , will be the meeting in Florence (IT) of the , co-organized by EGOCREANET (www.EGOCREANET.it) and collaborators, that will be held in “Strozzi Palace”, c/o Vieusseux - Ferri-Hall, in Florence (IT) the next 20/21-NOV.2008. (7)

N.B. - Salvator Dali’ , in his paintings shows an impressive feeling for the “Metamorphosis of space time”, that he expresed through a radical re-envisioning of the space-time matrix . “Time as space in aestheics domain”, can be e seen as a forecast of an emergent paradigm of “Q.Bio-Phys Realm”. In fact spatialization of bidimensional–time, shows that “simultaneity” in artistic simulation, was primarily expressed through the virtual eye of the creative minds. Hence S.Dali’ paintings represents, in contemporary era, the best expression of how the “immaterial aesthetic power of artistic visualization”, anticipates future paradigm shift in scientific knowledge, in a way that in synthese both “Science& Art”, will be able in making new sense and meaning to develop a for improving a more consciuos rationale and aesthetic evolution of contemporary human minds.

The Metamorphosis of Narcissus, 1937