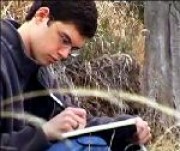 What are the different elf houses and what do their names mean? I know of 6 houses (Drottning which means queen), Rilvenar, Miolandra, Thrándurin, (Haldthin which means thornapple), and Valtharos. Are there more? - JosephShadeslayer (paraphrased)
Christopher Paolini: Elvish family names are much like our own: some have obvious meanings—like thornapple—and some don’t, or, if they did, the meaning has been forgotten in the passage of time. As for the names you listed, I haven’t yet done translations for them, except for Oromis’s house, which I’ll keep to myself for the time being. Also, dröttningu and dröttningu are titles, not family names. I actually haven’t mentioned Arya or Islanzadí’s family name anywhere in the series.

Last time Christopher Paolini said there would be complications if someone touched a hatched dragon before the chosen person did. What kind of complications? Can they be fixed? How would the dragon react? - bbcat (paraphrased)

Christopher Paolini: A person not chosen by a hatchling who touched said hatchling before their intended Rider would interfere with the proper functioning of the spell that forges the bond between Riders and dragons. Would the damage be irreparable? Not necessarily, but it would depend on whether other spellcasters were close at hand, spellcasters who had a close knowledge of the spell between Riders and dragons and who could, in essence, reset it so as to allow the proper bonding to take place. Even if that happened, the person who originally touched the dragon would still have a gedwëy ignasia, and he or she would always share a connection with the dragon along with the dragon’s actual Rider. If any of this happened maliciously, I wouldn’t put it past the dragon to kill the intruder at some point. Dragons don’t look kindly on meddlers.