It's entitled The Full English, but it could have been "The Full Judge"... the new Judge Smith album (VDGG founder member, since university days Judge is a good friend and musical partner of Peter Hammill - just listen to the 1992 Usher rock opera) gathers most of the musical outputs expressed by the artist during his long carreer. The album will be available at the London showcase on May 6th. 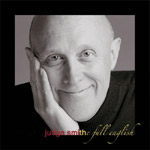 If anyone was worried about the new Judge album now can relax: The Full English is 100% Judge Smith. It features a bunch of stories and tales, a mixture of singer-songwriter stuff, theatre and some nice surprises. Developed with an intimate line up (Judge recently defined it an “unplugged” album) The Full English strikes and conquers the listener above all with its organic and coherent form: once you’re connected with the record’s mood it’s difficult not to be fascinated.

Despite Judge sails gladly from tango to reggae, from folk to rock, his strenght and charisma keep it all on track. Also, the beatiful production (courtesy of Marco Olivotto/Labour of Love Records, who already earned a very good reputation producing the Jackson in Guastalla DVD a couple of years ago), and the perfect choice of the musicians (John Ellis on guitars, Michael Ward-Bergeman on piano, organ and accordion, and René van Commenée on drums and percussion) has a big part in it. Especially Ward-Bergeman accordion work is one of the nicest surprises of the album, as it both adds a new and melancholic touch to such classic tracks as Carpet Tiles (previously released on the Dome of discovery album) and donates a fresh rhythmic pulse to the more funny “Monty Phyton kind of stuff” (Like a Rock, Tell me you love me). But all the instruments involved are pretty appropriated to the album’s mood, as the warm, tipically 70ish organ and piano sounds perfectly match with the elegant acoustic guitar work by Ellis and of course with Judge heartfelt vocal performance.

So we have a good compilation of messed relations stories, treated with the typical English kind of irony: Seemed such a nice boy (with a political hook in the lyrics) and Not drowning but waving would not have been out of place on Masters Spoon River Anthology, whilst the Take it away, Advance the spark and Chris does it better beat flavour is very enjoyable. A solemn rendition of It’s the silence that kills you from the Curly’s Airship album end it all in a very impressive way. But that’s not enough, as we also get a video track as a bonus: it’a Judge interview filmed in the Labour of Love studios, that allows us to learn a bit more about the making of the album, the musicians involved, the future plans and… the VDGG reunion.

So, what else? The Full English is a beautiful album, you’ll get addicted to it. Certainly Judge has the gift of being able to put together some small stories and a couple of chords in such a sincere and fresh way that you cannot be left indifferent.

Album tracklist: Take it away, Carpet Tiles, I want some of it, Chris does it better, Not drowning but waving, Seemed such a nice boy, Advance the spark, Like a rock, Tell me you love me, We’ll always have Paris, It’s the silence that kills you, But is it art?