Matthew Parmenter was the leader of the awesome progressive rock band Discipline, who released two excellent studio albums during the 90s and that was often compared with VDGG. As Parmenter and Hammill will share the same bill at Gouveia Art Festival in April, we asked Matthew some questions about his relationship with VDGG and Hammill production 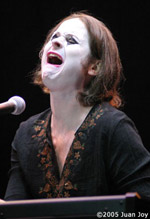 Matthew Parmenter was the leader of the awesome progressive rock band Discipline, who released two excellent studio albums during the 90s. After Discipline split up, Matthew started a solo career that led to the beautiful Astray in 2002. As recently Parmenter started performing alone on stage with only acoustic guitar and piano, many people noticed what was partly evident in Discipline effort as well: a strong (though mostly unconscious) connection with VDGG and Peter Hammill’s music. As Parmenter and Hammill will share the same bill at Gouveia Art Festival in April, we asked Matthew some questions about his relationship with VDGG and Hammill production

How did the Hammill/VDGG connection come about? As I understand it was because of Anekdoten’s bass player Jan Erik Liljeström?

There is no real connection, of course. I have never met Peter Hammill or any of the VDGG band. But in tiny print in the liner notes of our Unfolded Like Staircase CD, I thanked Jan Erik Liljeström for introducing me to ph and vdgg. I abbreviated ph and vdgg as I have written here, thinking this abbreviation would be a cryptic personal message to Jan Erik. I did not realize that others would immediately decode this message. Some did not, in fact. One reviewer interpreted the message as thanks for a particular chord progression, which he guessed we’d lifted from our Swedish friends. But the cat’s out of the bag now.

Prior to this written acknowledgment to Jan Erik, Anekdoten thought that some of Discipline.’s songs sounded Van Der Graaf influenced. I did not know VDGG or Peter Hammill’s music yet. Anekdoten all seemed surprised, maybe even taken aback, by my ignorance. So Jan Erik suggested several albums for me to hear. I thought so well of Anekdoten that I started looking for the recordings he recommended.

What are your favourite PH/VDGG albums and why?

Godbluff was the first VDGG album that really spoke to me. What a great album that is. It rocks so well. It feels liberating and free, but also frustrated, trapped. By the time it rocks, you crave it. So satisfying.

It typically takes me several listens to appreciate VDGG and Hammill’s music. I cannot say why this is, but I have come to recognize delayed appreciation as a common characteristic amongst the pieces I love–no matter who is the composer or songwriter. The change in my opinion, from disinterested to passionate adherent, reminds me that I cannot always trust my instincts when it comes to art, and I am humbled by the transformation. Is this delayed reaction something inherent in Hammill’s music? No, for surely my reaction to the music is my own, just as your reaction is your own. But clearly Hammill writes music that has an appeal that I cannot always grasp at first. Hammill’s music changes me somehow, teaches me something about the music I respond to. This is why I feel so strongly about Hammill’s contribution to my recent life as a listener. “…was blind but now I see.” You get the picture.

I have bought all the VDGG albums, and I particularly recommend Pawn Hearts and Still Life as well as Godbluff. Peter Hammill’s prolific output has outpaced me, I must admit. I have many albums by him, but not all of them. I do not copy CDs or download free music from the Internet. It matters a lot when you listen to lesser known artists to actually buy their music. (But perhaps I’m biased?) So I have much to find by Hammill yet. I own Chameleon, Silent Corner, Future Now, PH7, Sitting Targets, Skin, Out of Water, Fall of the House of Usher (sans guitars), Roaring Forties, A Black Box (excellent), In a Foreign Town, X my heart, Everyone you Hold, This. I think that is less than half of what he’s released. Since I am a dad I listen to less rock in the car now, and that has slowed my acquisition. I do not want to predispose my kids to the drums and such. (Though somehow my five-year-old daughter has decided she likes Magma!) Also, a friend loaned me Nadir’s Big Chance, which rocks.

Your song Between me and the end, included in the Astray album, could be a typical Hammill song a mixture between In the End, The Lie & Stranger Still but of course with a very original feel and artistic contribution by yourself.

I was writing myself through a difficult and uncertain period in my life. Between me and the End just sort of emerged. I hate to lead anyone to make an association between my song and the work of others. I know this is where the interview has gone, and “Yes,” I do love Mr. Hammill’s work. But listeners should be able to reach conclusions through their own associations and thinking, not mine. Comparison between songs, particularly in print, steps close to a risky practice in musical criticism, whereby the reviewer leads the reader by association with other, more familiar pieces. Imagine if you had never heard Stravinsky’s Firebird and you read a review comparing it to Debussy’s “Afternoon of a Faun.” Do you see the danger? If you knew both pieces, then maybe this is not so bad. But if you knew only the Debussy, how would you come to the Firebird? Perhaps the reader has some responsibility in this, too, so maybe it’s not such a big deal. See Rilke’s “Letters to a Young Poet” for his views on this subject. And no, I do not mean to compare my sparse, 3-minute, pretentious pop song to the Firebird.

All that having been said, Between me and the end does have a similar feel to some of the songs you mentioned. But those songs are truly great. I’d rather not compare. I realize now that Hammill’s Stranger Still that you named above is the song I always thought was called “Entropy”. So thank you for that mental calibration. What a great melody in that song, and he just sort of tosses it out casually.

Did you start playing sax after listening to VDGG or were you interested in that particular instrument before?

I had begun playing sax a few years before hearing VDGG. When my band shared those shows with Anekdoten, I was playing a little sax here and there. This was another reason Anekdoten thought our sound resembled that of VDGG. I have not given this instrument enough time to play it well, or even to play it consistently. Still, I can overdub sax on a recording or fumble through on stage.

What about the 2005 VDGG reunion and new album Present? Was it something you were especially awaiting for?

Oh yes, definitely. And a great album it is! A real fusion of Hammill’s later sound with the later band sound. (And that organ entrance! …Gives you the chills. Like coming home).

The presence of the white makeup mask is definitely a landmark in your artistic career. It’s not casual that the mask is featured in a very prominent way on the new Discipline DVD cover, and on the Push & Profit cover as well. What is your relation with the mask? Is the makeup mask still the key for you to be less inhibited when on stage, or has just become a distinctive part of your stage image?

I cannot explain what attracts me to the makeup. It is childish. Perhaps I can hide behind some heavy intellectual BS and provide an answer that will satisfy? No performance is truly sincere, though the best performers would make us believe it was. We all care deeply how we are perceived by others (and mark well the person who claims otherwise). The performer portrays an idealized or otherwise exaggerated presentation of self, and the audience, participant in the spectacle dance, is either moved or not moved, taken in or suspicious. So it goes with drama, politicos, and everyday life. It is good to see the clown again. He is much greater and more terrible than I am. And in my imagination, the paint concedes that the presentation is a hoax. Sometimes blatant fakery poses a poetic, ironic contradiction whereby its own manifest insincerity proves the more sincere. And furthermore, I do not like, and would disassociate myself with, the weak, whimpering, grotesque personas born out of these songs. Many have suggested I drop the gimmick. And so in part I maintain it to spite the judgmental.