The Fish and the Scorpio

I met ex Marillion singer Fish during the Italian tour to promote his new album 13th Star. It was a long and beautiful conversation, so I took a chance to ask the Man some questions about his relationship with Peter Hammill and VdGG as well... the full interview (in Italian) was published on the latest issue of the Italian magazine Wonderous Stories. 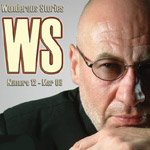 I have a couple of questions about Peter Hammill, if it’s ok with you.
Yeah, Peter. I’ve not talked to Peter for ages. I’ve not talked to him because Peter is a very private person. I really like Peter, he is a very intelligent man he is very English, I’m very Scottish (laughs). He is a very reserved character, I’m a lot more passionate, I’m a lot more Italian, but I know he’s got a great love of this country, he also speaks perfectly Italian

I’d like to start from the famous Fugazi artwork that includes two Peter Hammill album covers in it, Fool’s Mate and Over. Was that your choice?
Yes. Over is definitely one of my favourite Hammill albums. And it’s interesting, I remember asking Peter, when we were into the Script tour, I said to him what it was Over about, it’s an amazing album, it’s absolutely heartfelt album, the emotions it’s in the album. And he said “Oh you never want to go there”, he said “I don’t want to go back there again, that was one of the most traumatic things in life”. It’s interesting because a journalist in the UK said that 13th Star in a feel sense and in an emotional feel sense is very similar to Over, and I never thought about that till that journalist mentioned it, but when I went back home I put the album on and I went “God…”. It’s just the feel, musically it’s nowhere nearer.

In 1983 Peter Hammill opened some Marillion concerts as a duo with guitar player John Ellis. What are your memories of that bunch of shows? I know that Peter’s music did not get on too well with Marillion’s audience
He had a hard time with Marillion audience. I was watching his gigs every night, it was great, for me, it was brilliant, I was watching one of my heroes every night. I started feeling really bad cos they were supporting us, I felt really embarrassed. One night Mark Kelly (Marillion keyboards player - ndr) and I were up on stage during a soundcheck and eventually we started A Plague of Lighthouse Kepeers singing the opening section and he was standing aside of the stage and went “Oh dear…”.

In 1992 you were about to be part of the opera The Fall of the House of Usher. Why it didn’t happen?
That never happened, yes. One of the problems was that my voice seemed too similar to Peter’s, and I think that when you put together an opera you need to have very different voices for every character and the problem was my voice being too close to his in style and it didn’t work out right. I think there was a bit of embarrassment that came from that thing, I don’t know why happened but I wasn’t insulted by his decision because he was the project manager. The last time I wrote to him was when he was recovering from his heart attack, I don’t think he even lives in the same place anymore.

Did you have a chance to listen to Hammill’s latest stuff, the VdGG reunion and so on?
I’m not ahead of his music, honestly I’ve lost touch of what he is doing. I had the new Van der Graaf Generator album (Present - ndr), and I thought it was interesting, and I got the remasters I was working on Planet Rock as a DJ, and I played some stuff from Godbluff and Still Life which got great responses, it was great to go back and listen to that stuff again.